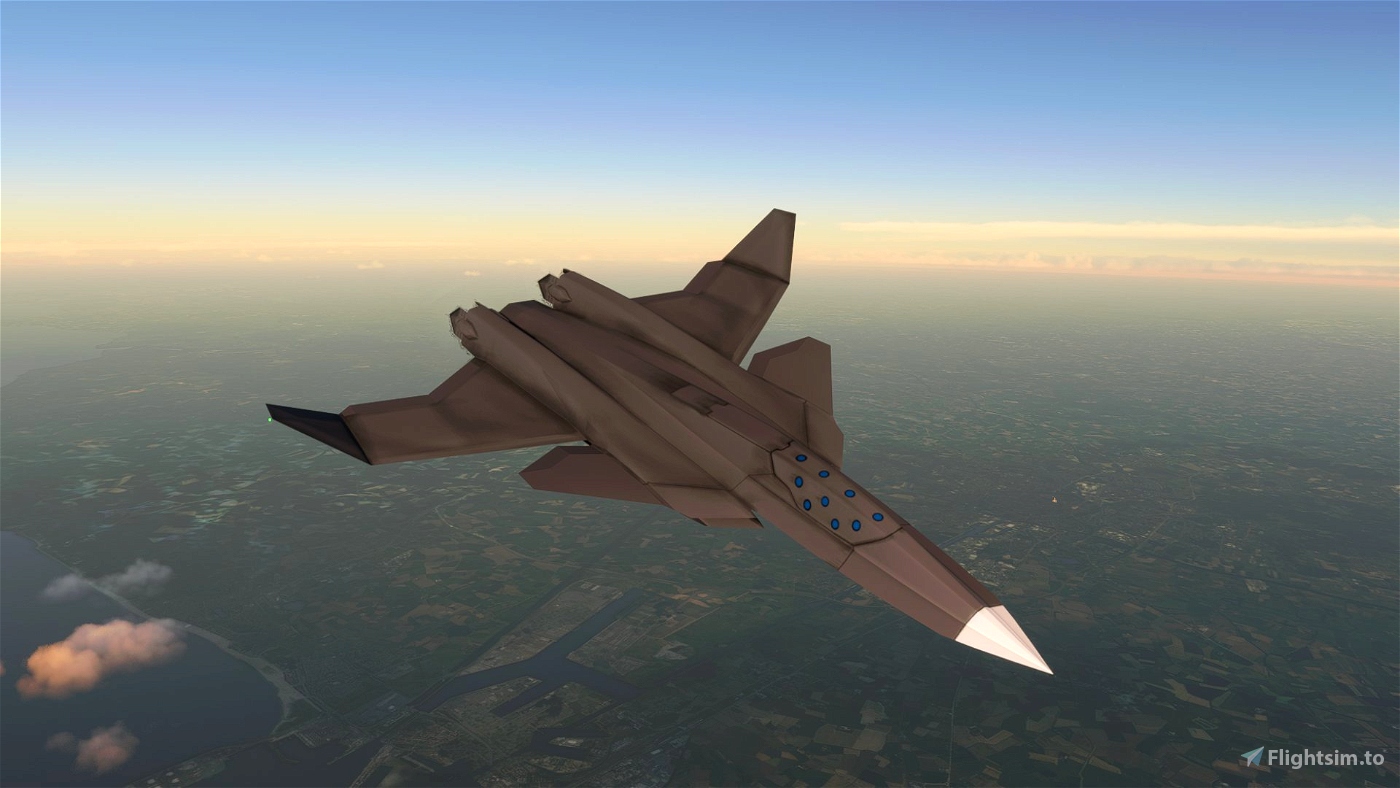 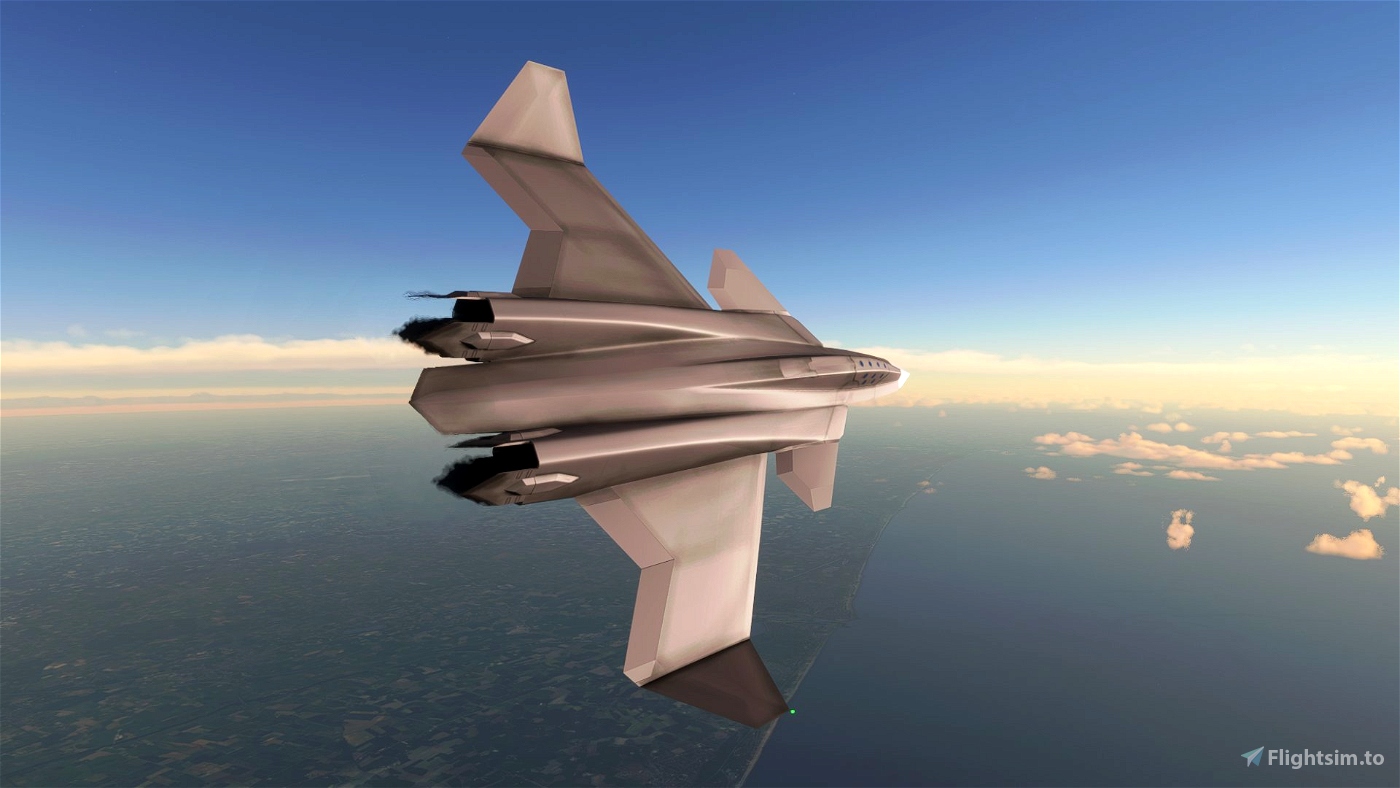 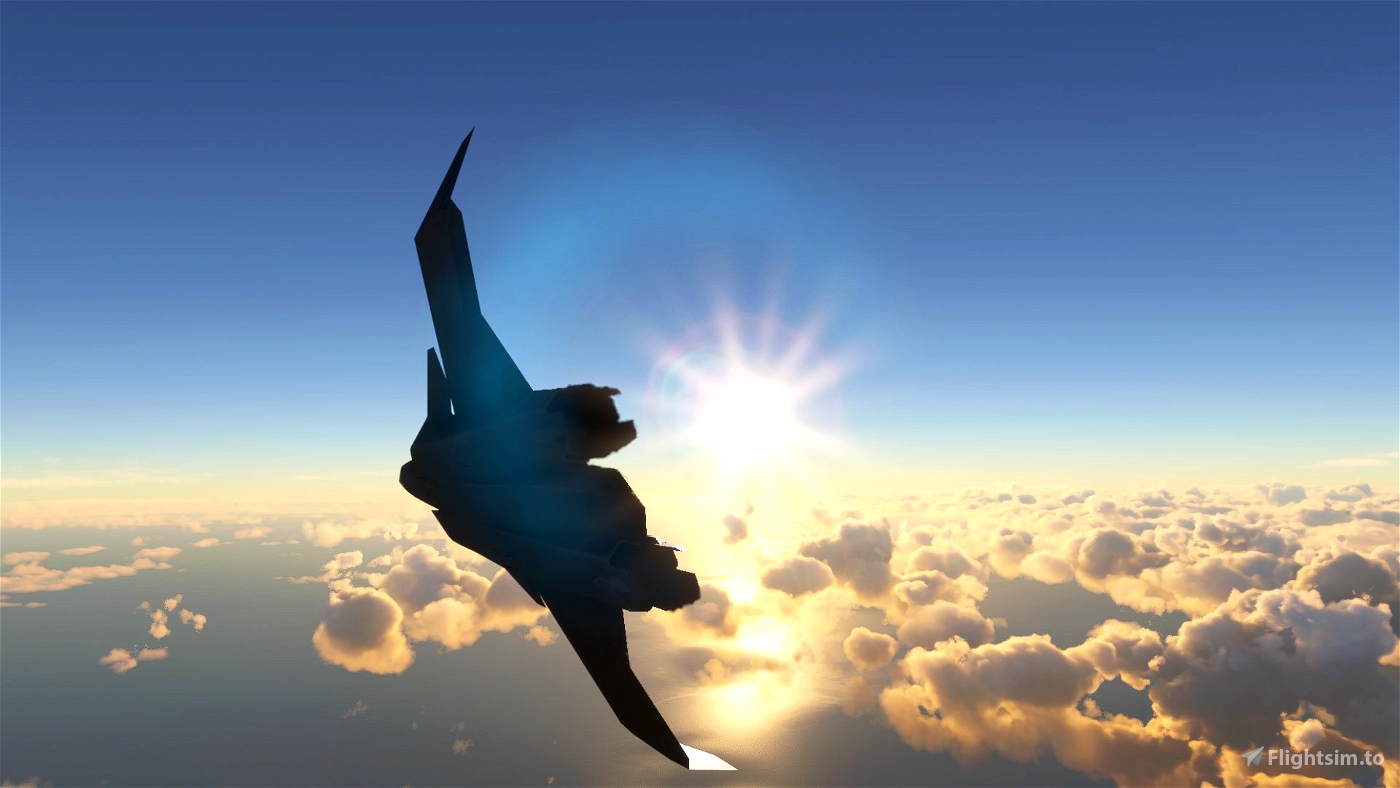 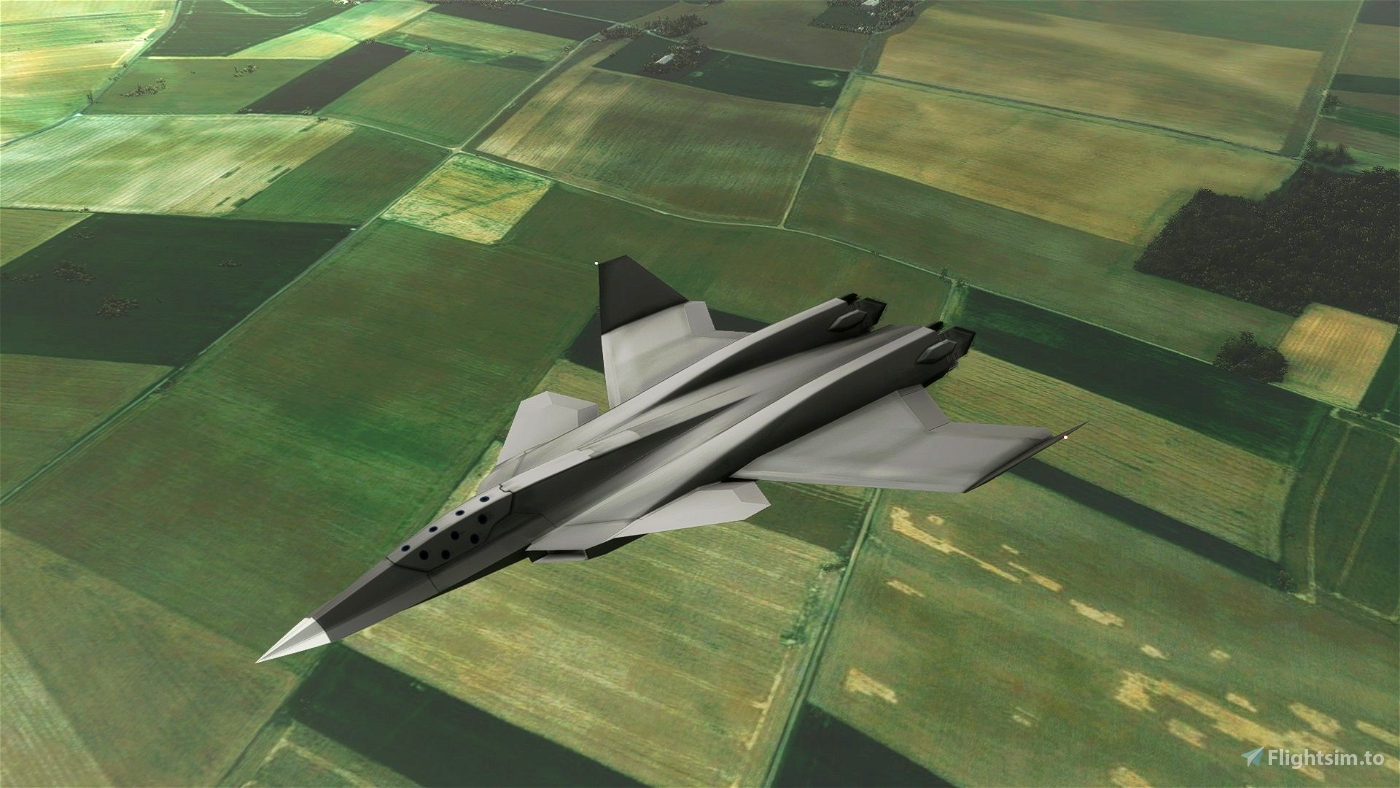 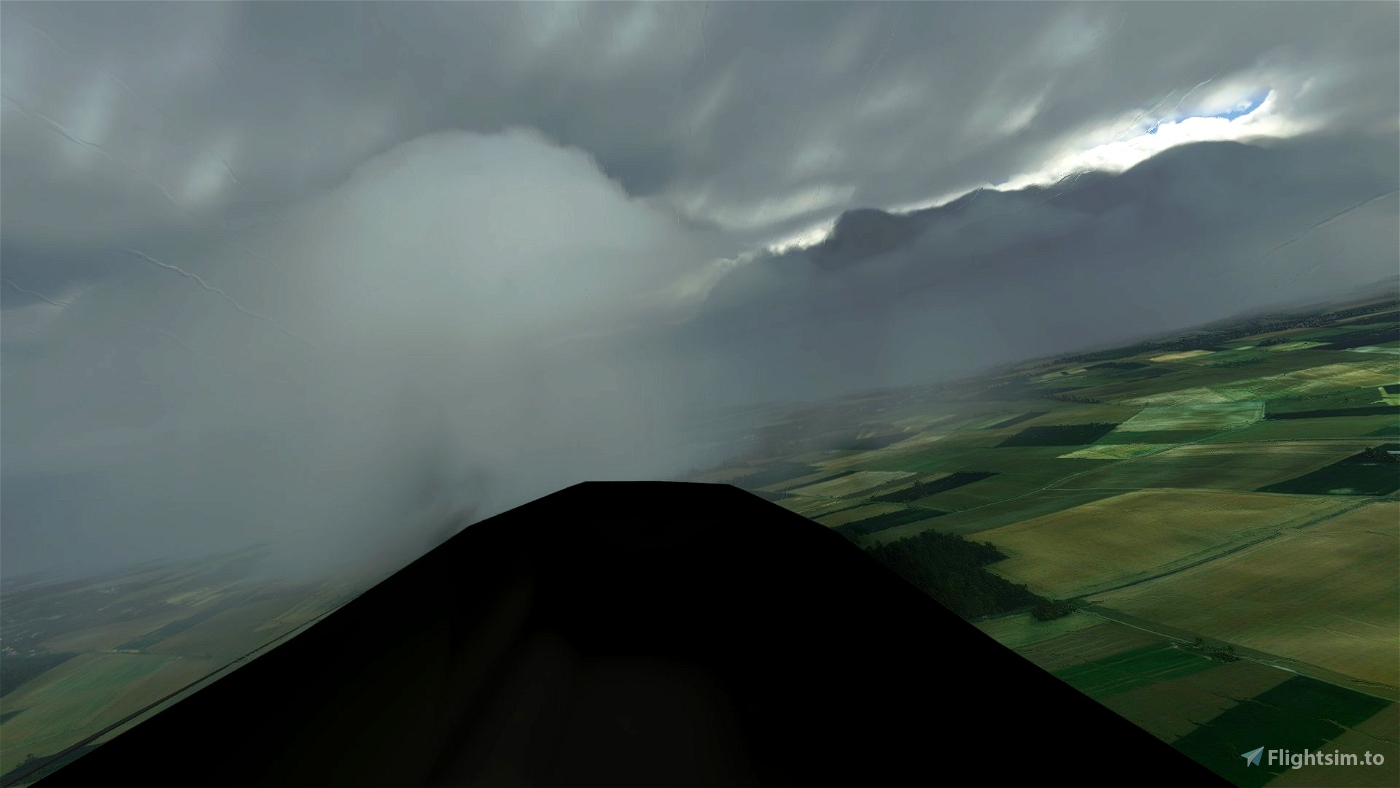 Based on the General Resource XFA-36A super-maneuverable air superiority fighter from the game Ace Combat 3: Electrosphere.

The XFA-36A shown here looks very similar to it's original counterpart from Ace Combat but is not a 1:1 replica of the original plane.

This model is made 100% from the ground up. NO assets from the original game or third parties were used in the process of making this.

This project is currently in beta and has been tested enough to validify the plane working at a base level however issues still persist.

Please consult the list below of KNOWN ISSUES before sending a ticket:

- misaligned textures on the wheelbays

- out of control drifting when taking off or landing

Notice: updates have currently slowed down due to persisting issues trying to convert animations from the old codes to the newer xml codes which support gear setups like taildraggers and newly added particle effects for different terrains, but having implemented this in a newer experimental version keeps breaking the landing gear animation which looks like a massive eyesore at high speeds.

I've forwarded this issue to other developers in hopes to finda a fix but Unfortunately I can't release a newer version until we've pinned down the cause and fixed this persisting issue.

I'm incredibly sorry for the inconvience.

Create a free account now to be able to to keep track of your mods and their latest updates without struggle.

Buy me a coffee

Geschätzte 09 Oct 2021 » As the current model just can't seem to get the animations to work properly, I opted to use the current model as exclusively experimental builds in order to figure out what works and what doesn't, however for the future release I'll be using an updated HD model that will have the cockpit internals modeled in, so stay tuned!
Backlog
Vorschläge, Bugs und Ideen für die Zukunft.
Newer upcoming build has broken landing gear animations.
Backlog

Geschätzte 01 Sep 2021 » Unfortunately I ran into the same issue from pre-0.6.0 builds where the animations would break when using certain lines of code. I'm currently hearing around in developer circles on how to fix this as with the new sim updates, new parameters and codes have been added which in some cases can make certain lines of code that previously worked fine, obsolete. with the new particle effects for the landing gears making contact with the ground, a whole bunch of new lines have been introduced that broke the animations trying to implement them.

unbelievably excellent plane, I'd gladly have paid 40 dollars for it, shame it doesn't have a cockpit 😞

When will the next version be released?

This aircraft needs better taxiing controls. Veers to the left or right as you slow down to a stop. Taxiiing in its current form is a nightmare as is taking off for a second time (uncontrollable as it propels in one direction). Can someone tell me which settings one needs to modify in the configuration files in order to remedy for better taxiiing controls? How to remedy uncontrollable take-offs as well? Which particular configuration files? Mid-air flight is ok except that the aircraft shakes at high speeds. How to fix that as well in config files? Thanks.

Truth be told this project has been very draining so far. I might start a different one in the future after I've made a 1.0 release but I'm damn sure it won't be an F-18 or Mirage.

How about a Pelican lol 😁

Fun to fly, beautiful to look at and sooo fast. Great job. Difficult to get her stopped though, a lot of thrust at zero throttle.

2 month(s) ago
The texture of the landing gear door is a little strange.

2 month(s) ago
The appearance is well reproduced, and it is a very nice aircraft that is easy to operate even with a keyboard.

Flying the updated model now with the cockpit. Love how it's coming together. Even if the cockpit isn't finished, could you add AP to it so I can control the aircraft with Mobile Companion App?

I NEED TO SEE THE XFA 33 FENRIR!!!! IS A LOT MORE POWERFUL THAN THIS and is my favourite plane on ace combat (ace combat x for me is the bes tin the series)

Unfortunately as it currently stands, I will be exclusively developing updates for this aircraft and not be taking part in any new Ace Combat plane projects as I'm probably looking to participate with other developers in making existing aircraft. Mind you, I've so far developed this aircraft all by myself with exception of consulting developer groups to help me tune the flight characteristics.

I've tested it with the place holder cockpit and it's a really fun aircraft to fly, great stuff and look forward to see what it becomes!

I love it so much. Keep it up! I'm looking forward for future updates! I do suggest a cockpit so that it'll be much easier to maneuver hehe

First off, I just want to appreciate the fact you took your own time and dedication to make this aircraft for everyone to enjoy in MSFS. I didn't have any issues with the aircraft except the following

There is no reason why to give this plane less than 4 stars as its made by the ground up by a single person, And i hope the developer of this aircraft keeps going until it is finished. if the developer of the aircraft does read this, Please know that don't allow mean or rude comments to make you upset. You did a great job here and this seems more payware than freeware by opinion as it is very well made, especially that it is made by one person only. I'm pretty new to MSFS2020 but I still appreciate the amazing freeware developed for this game. To also add, I find it amazing that the developer plans to add a cockpit all by themselves even though this aircraft in Ace Combat 3: Electrosphere has no cockpit and it will be a huge creative feat in itself to model and develop the cockpit by hand. So to end this, great job bro and i hope you have fun developing this aircraft for others to enjoy and I'm grateful that you made it free

Note: I'm not aware if the small instruments in third person is a bug from the game itself, if it is. I apologize for mentioning it!

Cool concept, just wish you'd give it a cockpit... anything... also to add AP. I know you're excited to work on this project and stuff. And I don't mean to speak for anybody else but myself, but it's getting very tiring seeing aircraft not even 1/4 way done being published. Wishing you the best with this aircraft! I am definitely looking forward to a more finished product. 😊

I fully understand your frustration. creating this all by myself from the ground up and then consulting other aircraft developers was most certainly not an easy feat to start with, and it took another couple months to iron out problems just to get it to fly in a somewhat realistic fashion. there are currently 3 issues on the priority list: a cockpit, fixing the throttle pulsing, and work on better textures.

Can not wait! Will be a fun aircraft to take off out of KXTA.

She looks both Sleek & Sexy! Can't wait for updates! Thank-You! 😀